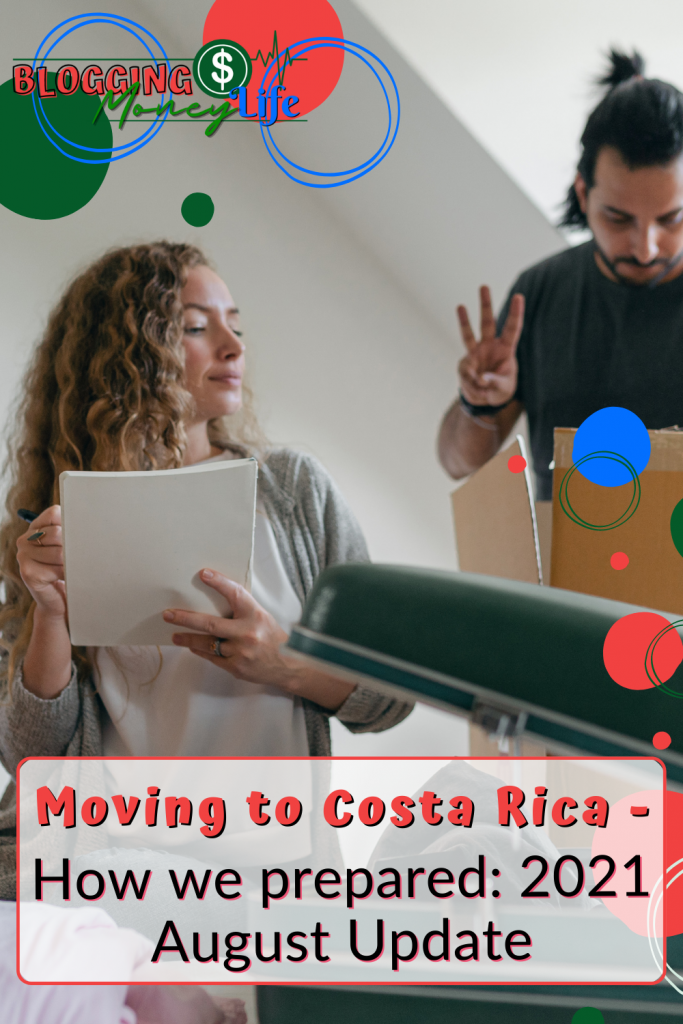 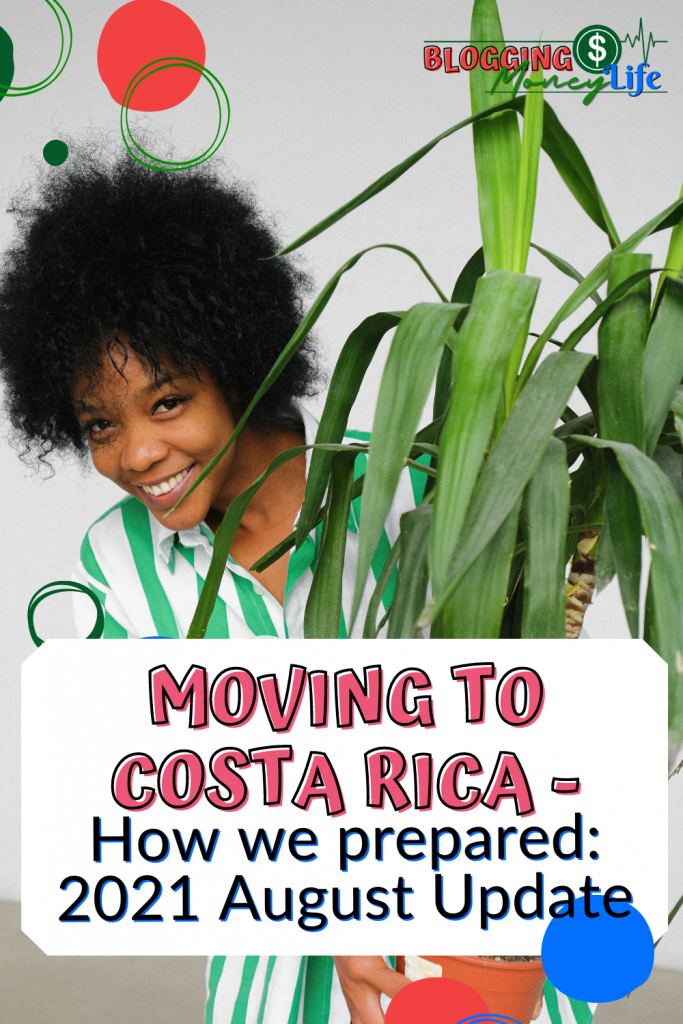 We did it! After an entire year of planning, preparation, and selling nearly everything we own, we finally did it. We have moved to Costa Rica. Now that the move is behind us, this marks the end of our moving to Costa Rica Update Series.

But we are not saying adios to sharing our Costa Rica story. We have a whole new journey ahead of us and a new series on its way!

Before we announce the name of our new series, let’s recap what we have been up to over the past month.

It’s been another busy one. After selling our house at the end of July, we started out the month in Austin, Texas, moving in with Jas’s sister, our brother-in-law, and our niece.

We stayed two weeks with them in their beautiful 2 story home, and I got to say, we had a great time together. But, unfortunately, since we lived an hour away in San Antonio, we didn’t get to see our Austin family as often as we would have liked.

So, we felt very fortunate to spend two weeks of quality time with them before our long-distance move.

After we tied up a few remaining loose ends in Texas, our two weeks were up, and it was time to call an Uber and head to the airport. I’ll never forget the look on the driver’s face when he stepped out of the car to open its trunk and realized that we were bringing 13 large suitcases with us.

But he was a good sport and happened to be a Tetris master; he packed everything nice and tight into the trunk without an inch to spare.

Twenty minutes and a great conversation later made it to the airport. Preflight check-ins, security, and our flight went smoothly and after watching a couple movies on the airplane finally arrived in Costa Rica.

Wanting to avoid nighttime travel during Costa Rica’s rainy season, we decided to book a hotel for a night in San Jose. So after a very short drive from the airport, we checked in to Hotel Mango and had our first experience with gringo pricing.

For those of you reading who don’t know what “gringo pricing” is and who plan to visit Costa Rica, I’ll give you the skinny.

Some locals start picturing dollar signs as soon as they see Americans visitors. They think that American tourists have money to waste and don’t mind paying more for goods and services.

With this in mind, they may tack on a few extra dollars to the standard price as a “Gringo Tax.” And for us, the gringo tax was reflected as an additional $10 charge on our credit card.

I had mentioned earlier that the hotel wasn’t very far from the airport. Well, we literally could have stepped off the plane and walked there. I mean, our room was basically butted up to the far end of the tarmac.

We were so close to the action that we had the pleaser of being sung to sleep by the sweet roars of passenger jets taking off and landing all night long. Our room was also conveniently located about twenty feet from the highway.

This allowed truck drives to give us a lovely “jake brake” wake-up call just before 5am. Breakfast opened at 8am, and they offered Gallo Pinto, the traditional Costa Rican breakfast.

It consists of rice mixed with black beans, served with sour cream, eggs, and fried plantain. That part was excellent, and it was a charming hotel, just not in the best location.

Our taxi driver showed up right on time, and he helped us load up our luggage before we took off. It was a four-hour ride, but it didn’t seem that long because the scenery was lush with mountains and greenery. It was gorgeous.

We stopped for a quick lunch in a small beach town called Playa Hermosa. And about an hour later, we finally arrived in Uvita to settle into our new home. The house that we rented was a neet container home.

The owner had it all ready for us, and when we walked in, it was nice and clean and cool from the air conditioning. The space was effectively designed and fully furnished. It was nice not to worry about a bed, linens, or kitchen appliances. Everything that we needed was already there.

The following day, we met with our relocation consultant Augustina, at a local coffee shop. When we arrived, she was already there waiting for us and ready to introduce us to another U.S. expat, Jerry. We were excited to meet in person finally. We exchanged greetings, sipped coffee, then the two showed us around Uvita.

Augustina took the time to familiarize us with all the essential spots in town. We walked to the bank, grocery store, pharmacy, veterinary and Urgent Care. She made a list of her favorite restaurants and sodas for us to check out. Most importantly, she set up our cell phones to work in Costa Rica.

She showed us some fun things too. For example, there’s a bamboo forest that is within walking distance, as well as the Uvita river.

The beach is also only a few minutes drives away. On the way home, she took us by the farmer’s market. It happens to be directly behind our house.

We mentioned to her that we needed a little bit of a bigger place. Our container home was nice and cozy, but we knew we would be in trouble once our shipping container was full of stuff arrived.

She recommended that we visit with another ex-pat named Trudy, who would be moving out of her house soon. She has a super lovely place, but within the first 10 minutes, we knew it wasn’t going to be large enough after our shipment arrived.

About halfway into our first week in Uvita, Jas reminded me that it was my birthday. So we got up early and started heading towards the beach to celebrate.

The beaches are beautiful here. I spent my time some time in the waves while Jas relaxed on the sand. Finally, after a few hours had passed, it was time to head home and prepare for our blog launch.

One of our favorite pastimes so far has been trying out the local restaurants. We have been to quite a few already, and overall we have been really impressed.

One of the cool things they have here is little eateries called sodas. A Soda is essentially a small mom-and-pop restaurant that’s is usually outside someone’s house.

One of Augustina’s recommendations for a Friday evening was the Uvita beer garden. So when Friday night came, we had to check it out. The first thing we noticed was the live music out there playing 90s alternative rock hits. They played pop covers singing in English and in Spanish.

The bar had a familiar and friendly feel with an eclectic group of patrons. Everyone there seems like they’re all from different countries, not just the U.S. or Costa Rica, but from all over the world.

We got to meet a bunch of different people that night. It’s cool to hear everyone’s stories and what inspired them to move to Costa Rica.

Well, that brings us up to date as far as everything that we’ve been up to since the last time we blogged about our move to Costa Rica. And now that our long-anticipated activity is over, this marks the end of our Moving to Costa Rica Update series.

We’re here! But we still have so much that we want to explore and so many things that we want to share with you. So we will start this next chapter with a new series where we show you what it’s like living in Costa Rica as ex-pats.

In this series, we plan to bring you along on all our adventures while exploring Costa Rica. We are want to check out the jungle canopy ziplines, hiking up active volcanoes, swim at the base of waterfalls, and do just about anything you would find on the brochure. We’re also planning trips to tour other cities and experience some of the different microclimates this county offers. And promise to keep you informed on our residency status and how we are settling in.

In honor of the Costa Rican motto of Pura Vida, we decided to call our series Livin’ La Pura Vida.

Pura Vida is Spanish for pure life. The motto encourages people to appreciate life’s simple treasures and take life as it comes and at their own pace.

The Livin’ La Pura Vida series is something we’re going to update you guys on every month so make sure you subscribe to get the latest updates.

Be sure to tune in next month because we’ve moved into another home in Uvita, and we can’t wait to show you around our new place.

Hey, ya'll! Chris and Jas, here. It's a pleasure to meet you. We're a couple of US expats living our best lives in beautiful Costa Rica.

Latest On The Blog

Ready to grow your blog so you can start living life? Join us on our journey.

Since Chris and I moved from the beach to the city

Me and my Christoph on the beach.

Relaxing with family in the natural hot springs @h

OTW to Guatemala City, Guatemala for the weekend t

La Fortuna is one of our favorite places for weeke

I can't wait to share our recent visit to the Aren