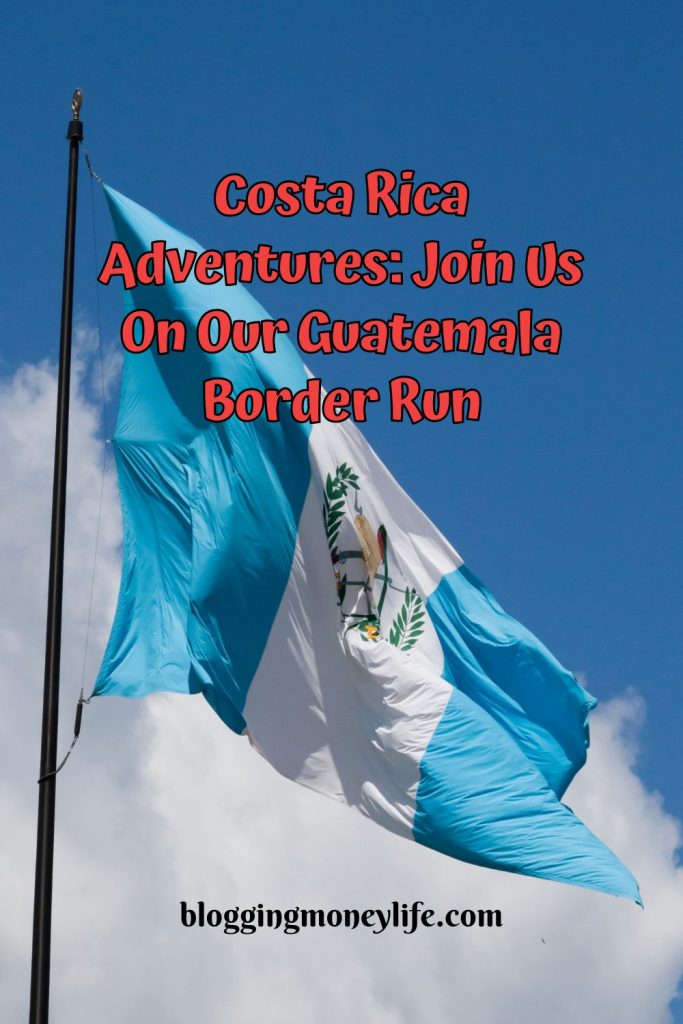 The Mayan heart of Central America is Guatemala. Guatemala is a unique and attractive place that is perfect for low-cost vacationing. It is home to many ancient historical monuments, spectacular ruins, deep jungles, vibrant architecture, busy marketplaces, and high volcanoes.

The wild mountains and jungles give travelers up for an adventure the opportunity to get away from the crowds and see unspoiled landscapes at a fraction of what they would pay in other parts of the world.

In August of 2021, Jas and I moved to Costa Rica from the United States. Since we still were not full citizens of Costa Rica, border runs have been necessary. This time, we decided to visit Guatemala.

If you live in Costa Rica, you must leave this place every 90 days to get your passport restamped. So we decided to go to Guatemala.

Guatemala does not require a visa for stays of up to ninety days or less. Although having a visa is unnecessary, you still need to fulfill the following requirements:

Residency in Costa Rica will be fast-tracked once your baby is born, as discussed in our video, Having a Baby in Costa Rica Vlog 2022. Since Jas was eight months pregnant, we had to do a final border run and intended to do so in the most stress-free and convenient manner possible.

We selected Zona Viva due to its high-end accommodations and fantastic dining options.

The flight took approximately one hour and fifteen minutes from San José, and I distinctly remember that each ticket cost around one hundred thirty dollars.

The airline offered wonderful snacks, one of the amazing things about the place that took us by surprise. They provided us with water, croissant sandwiches, and yogurt crackers, which were tasty. I can’t remember the last time I ate a meal while flying; it’s been a while.

The first thing that happened once we landed in Guatemala was that we had to go through the immigration process. There was no line in the immigration area, so it did not take much time. To go to our hotel from the airport, we took an Uber, which only set us back two dollars and forty-two cents.

We reached our modern hotel. Even though check-in wasn’t usually allowed until 3:00 pm, we went to see if we could get in any earlier. They informed us that we might check in early for a fee of $80. Or, if we waited until noon, we would be able to check in early at no additional cost.

We decided on the latter.

Now that it was nine o’clock, we had three hours to kill before officially checking in. Therefore, we decided to nap by the pool on the 16th floor.

The room that we stayed in was a junior suite. It was furnished with a comfortable living area. There was a small bar, a television, and a mini fridge.

Sliding doors served as the partition between the living space and the bathroom. Within was a dresser, a safe, and a shoe polisher. There was also an iron and ironing board.

From our window, we had a view of the majestic Guatemalan mountains. They looked almost as good as the volcanos in Costa Rica near our favorite hot springs.

The bathroom was equipped with a deep freestanding bathtub. It was a lovely tub with a separate area for a shower. Also provided was a vile bath salt, which we had searched for while walking around the city. It’s the little things that truly count!

Some of Jas’ favorite bath salts are:

The bathtub was probably the main reason we reserved this room in the first place–so that Jas could relax. In the end, the night was about $280 a night. Not too bad!

We planned to visit a museum to understand the Mayan culture deeply. When we reached the Museum, it was closed due to the pandemic, but we still had 7 and a half hours before our flight.

So we looked around the area near the museum and decided to eat something. We found a mall just 2 blocks from the museum and reached it fairly quickly. Jas and I were surprised by how large it was! Conveniently, the entrance was located next to the museum.

Jas and I finally decided to sit and eat at a great-looking restaurant. Jas decided on an all-natural drink, which is popular in Costa Rica. Chris got lemonade.

The food was incredibly tasty and had a bit of a spicy kick. We both agreed that the food was amazing and vowed to return.

Then we arrived at the airport.

And after some final preparations, we were on our way back to Costa Rica. We breezed straight through security, customs, and immigration because this place was so empty that it might as well be a ghost town. At that moment, no one was still waiting in line, and perhaps three staff were working on the whole thing. Guatemala was a great place to visit, and we enjoyed ourselves there.

Other Things to Do in Guatemala

This lake is widely regarded as Guatemala’s premier sunset viewing location. Panajachel is a tourist resort located on the lake’s northern coast and is a suitable location for organizing excursions of the lake and the nearby volcano. In addition, this lakeside location has various restaurants, bars, and other forms of nightlife.

This charming colonial city is nestled in a mountain valley between three volcanoes, giving it a dramatic backdrop. Cobblestone streets, antique churches and buildings, and ruins are examples of Spanish colonial architecture that can be found here. You can visit the Plaza Mayor to take in the breathtaking cathedral and gardens there, and while you’re there, don’t forget to climb the Fuego volcano!

These are by far the most visited ruins in the entire nation. When the tour groups leave in the afternoon, the park will begin to empty out, so prepare to arrive early and stay late.

You should also spend the night in the park to see the sunrise. If you wish to view the sunrise or the sunset, you will need to pay an additional fee for a guided trip. There is a fee of 150 GTQ to enter.

Chichicastenango is Guatemala’s most popular tourist destination since it is home to the largest indigenous market in North America. Thousands of Quiché Mayans travel into town every Thursday and Sunday to participate in a market where they can buy and sell wares such as textiles, flowers, poems, souvenirs, and handicrafts.

This natural landmark is located close to Cobán and comprises a limestone bridge that spans the Cahabón River and measures 1,000 feet in length. Participate on a guided trip into the Kamba caves illuminated by candlelight, float down the Cahabón River on a tube, or swim in the aquamarine pools along the bridge. Caves can only be explored with the assistance of a knowledgeable guide. Day trips range in price from 150 to 300 GTQ.

A Bit About Guatemala‘s History

The ancient Maya were a powerful and advanced culture that built several pyramids, some of which can still be viewed today in Guatemala. This civilization peaked between the years 250 and 900 after the common era, but by the time Europeans came to the region in the 14th century, it was already on the fall.

Colonization By the Spanish

In the year 1524, Spanish settlers came to the new world. They were successful in their conquest of the Maya, and the Spanish afterward colonized the area. When the Spanish colonized Guatemala, the country had three different capital cities.

The original city, Ciudad Vieja, was wiped out by a combination of floods and earthquakes. The second city was Antigua, and earthquakes were also responsible for its destruction. In 1776, the third capital was established, given the name Guatemala City at the time.

In 1821, Guatemala finally won its freedom from Spain after being colonized for so long. Even though the colonization of Guatemala ended more than a century ago, its effects on Guatemalan culture are still being felt today.

Guatemala is still home to many churches built in the Spanish colonial style, and the architecture in many parts of the country retains this vibe.

A further significant event in Guatemalan history is the genocide that took place there. More than 200,000 Maya citizens lost their lives due to Guatemala’s civil war, which lasted for about 30 years, from the 1970s to the 1990s. During this time, the Guatemalan government committed serious violations of human rights.

Though the country has made efforts toward reparations since the genocide, Guatemala still faces serious challenges, including widespread social inequality and political instability. It is believed that the civil war resulted in the displacement of 1.5 million people, and those people are still being uprooted today.

The past of Guatemala is fraught with tragedy, making it challenging to comprehend, but it remains an important component of Guatemalan identity. It is essential to have a fundamental understanding of Guatemala’s history to have a properly contextualized trip. Before going to Guatemala, it is strongly suggested that additional research be conducted.

Guatemala city is divided into 22 zones, of which we were in zone 10. It was one of the safest areas for tourists to be in, where they could stroll around without worrying too much about getting into problems. It was one of the best places for tourists to be. It’s a lovely city, and one of the interesting things about Guatemala Metropolis is that its elevation is just under 5,000 feet, which puts it dangerously close to becoming a mile-high city.

Well, it was just a little overview of the travel guide as we spent only 36 hours there. But it is a great and worthy place to visit. There are many more other places in Guatemala that must be visited. But our short stay was pretty nice there, and we will plan a long tour of Guatemala in the near future.

The Mayan culture in Guatemala is extremely diverse. Both the old towns and the jungles are teeming with life and character. Old ruins, beautiful lakes, and active volcanoes can all be found here. If you’re looking for excitement or the satisfaction of seeing something different from the norm, a trip to Guatemala is a great option. 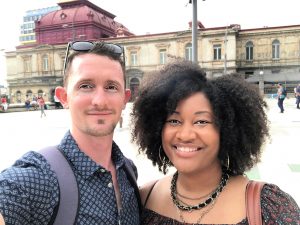